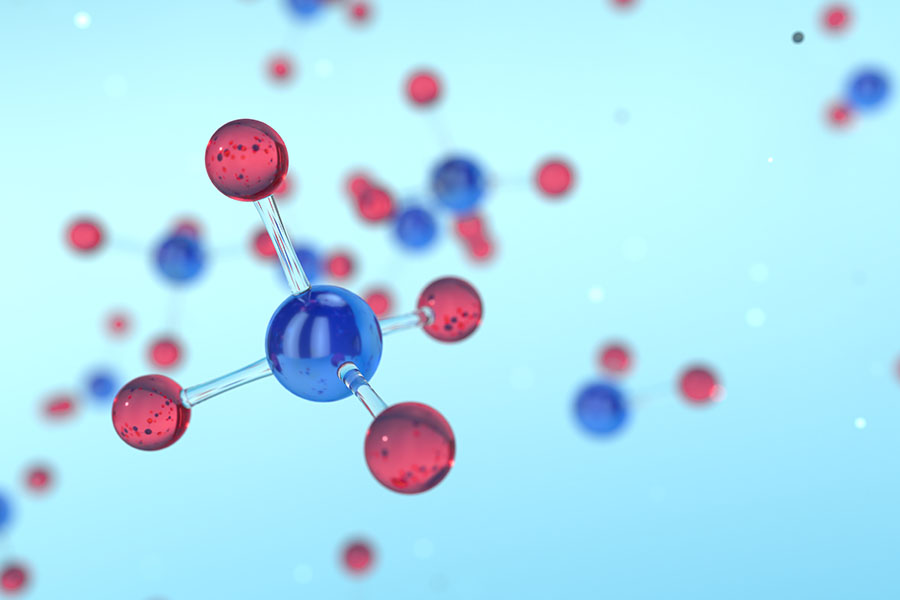 Copper (Cu) electrocatalysts appear to selectively reduce carbon dioxide (CO2) to hydrocarbons under the electrochemical condition. The absence of a systematic study based on time-resolved spectroscopy hinders the scientific understanding in the functional reagent – either metallic or oxidized Cu – responsible for the observed catalytic selectivity. Herein, an operando seconds-resolved X-ray absorption spectroscopy is introduced to uncover the chemical state evolution of the acting catalyst for carbon dioxide reduction reaction (CO2RR), being resulted from the oxide-derived Cu. Using a potential switching approach, the model catalyst can achieve a steady chemical state of half-Cu(0)-and-half-Cu(I) and selectively produce asymmetric C2 products - CO2H5OH. The first-principle simulations reveal that a surface composed of Cu-Cu(I) ensembles can have dual carbon monoxide molecules couple asymmetrically, subsequently enhancing the selective generation toward C2 products. Our results offer understandings of the fundamental chemical states and insights to the establishment of selective CO2RR. 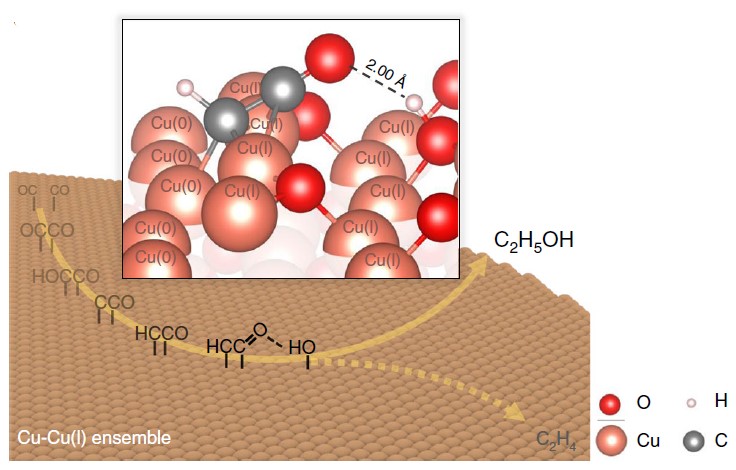 Since the Industrial Revolution, the energy demand of the global society has increased continuously. In order to satisfy the growing energy consumption, the drilling technology has substantially improved for the extraction of fossil resources in the earth's crust, such as petroleum, coal, and natural gas. The convenience of people’s daily life is facilitated by the conversion of fossil fuels into electrical energy, mechanical energy, or thermal energy. Consequently, the emission of carbon dioxide (CO2) into the atmosphere seems to be a necessary evil for the civilization evolution. The National Oceanic and Atmospheric Administration of USA has continuously monitored the atmospheric CO2 concentration for decades. In the recent years, CO2 concentration has made several historical records – being greater than 400 ppm (see Figure 1). The global greenhouse effect resulted from the high concentration of CO2 severely affects many geographical regions via the hazardous events such as rising sea level, extreme climate, and unexpected agricultural outcomes. From the perspective of resolving these issues, in terms of chemical technology development, reducing CO2 emission by the accessible CO2 conversion to chemical fuels becomes one of the urgent tasks for countries planning to reach a sustainable economical model.

Based upon the chemical definition, CO2 has the highest oxidation state for its carbon element so that CO2 cannot undergo any further combustion reaction with oxygen. In order to electrochemically convert CO2 into other chemical fuels, electrons and protons have to be provided externally. Such a CO2 conversion process is labelled as CO2 reduction reaction (CO2RR). The possible reaction pathway are outlined as the following:

The variety of reaction pathways listed above does not indicate all of the listed products are equally assessable. In general, generating a product molecule with a larger molecular weight automatically implies a tougher technical barrier awaiting to be overcome. Effective CO2 conversion to ethanol therefore becomes one of the popular interests of many scientific researches and potentially represents the underlying economic benefit.

In the literature, it has been shown that copper is a special electrode material being capable to simultaneously convert CO2 into various hydrocarbons under the electrochemical cell condition (meaning that the selectivity of product generation using Cu electrode is in absence). From the industrial chemical technology point of view, it is cost-inefficient to utilize such a non-selective chemical process.

Copper oxide is a natural product resulted from the metallic copper rusting. Through a proper preparation procedure, a special Cu-based material consisted of cuprous (monovalent copper cation) and metallic copper can be synthesized on the material surfaces. The previous scientific literature has reported that the presence of mixed oxidation states (divalent copper ions, cuprous ions or copper metal) on the surface can effectively facilitate the conversion of carbon dioxide into some products containing carbon-carbon chemical bonds, such as ethylene or ethanol. The formation of carbon-carbon chemical bonds can be achieved by the heterolytic bonding formation process of CO coupling. With the use of the intermittent applied voltage and the in-situ spectroscopic measurement, we have observed that the average oxidation state of the synthesized Cu electrode can remain fairly constant. Additionally, the mixed oxidation states – Cu(I)/Cu(0) sites can also remain populated steadily, ultimately increases the ethanol generation (see Figure 2).

From the theoretical perspective, a mixed-valence Cu(I)/Cu(0) ensemble models constructed using Cu2O(110) basal plane is reported to play a key role to promote the this ethanol synthesis pathway given by the simulation resulted of the first-principles calculations (see Figure 3). The hydroxyl functional groups of the high oxidation state region (in respect to the neutral copper metal) is considered to protect the oxygen-containing intermediates of the CO2 reduction mechanism via the dipole–dipole stabilization effect between the OH and carbonyl functional groups. 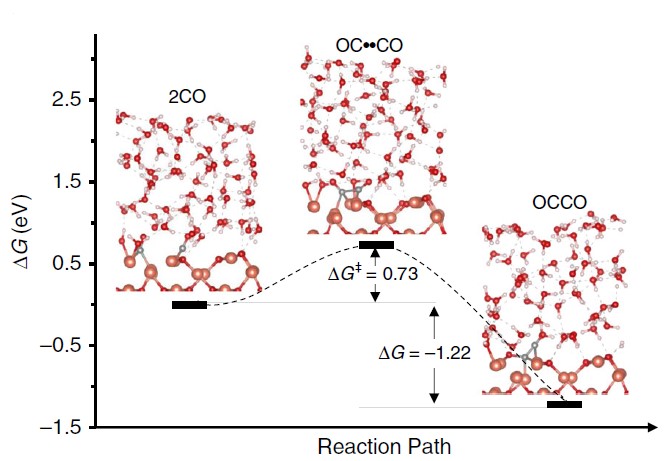 The computational results of this work are conducted by the research group in National Taiwan Normal University. Various basal planes of Cu-based materials are explored in order to identify the highly reactive interface, and subsequently leads to the rationale of ethanol generation mechanistics. The theoretical predictions are compared with the experimental works by Professor Hao Ming Chen’s research group in National Taiwan University where the material synthesis and in-situ spectroscopic measurements were carried out. Through the bilateral research collaboration, this novel Cu-based catalyst is synthesized, characterized, and interpreted. The selective ethanol generation mechanism is elaborated. 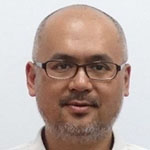 Professor Ming-Kang Tsai received his Ph.D. degree from University of Pittsburgh, USA in 2005. During 2006-2019, he worked as a postdoctoral researcher in Pacific Northwest National Laboratory and Brookhaven National Laboratory of Department of Energy, USA. In 2010, he joined the faculty of Chemistry Department, National Taiwan Normal University. His research interest focuses at the utilization the high-performance parallel computing facility, programming, and numerical analysis for the design or analysis of the catalytic materials / molecules. He is also interesting in enhancing the computer simulation predictivity with the integration of big data and machine learning approaches.