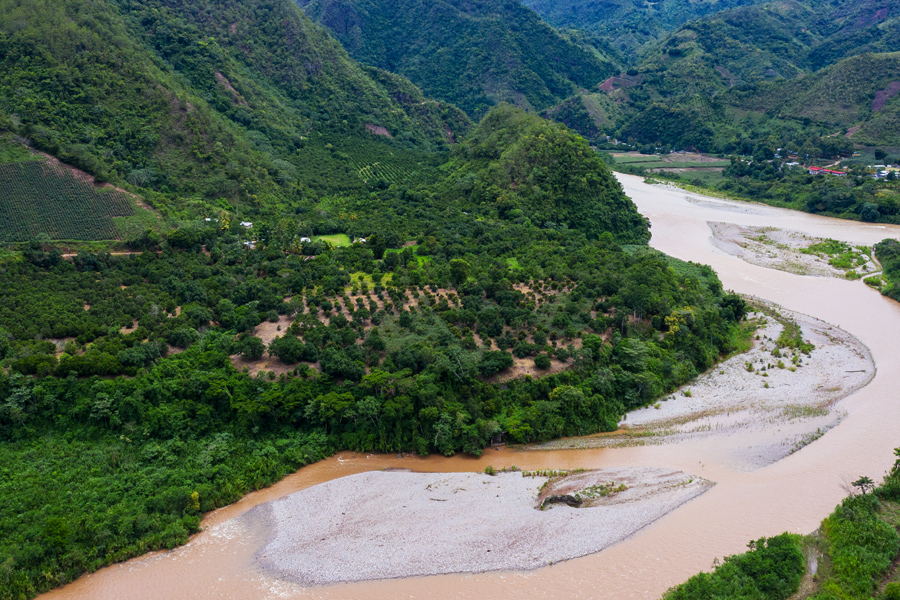 A river is no more just a passage that delivers rainfall to the ocean, it also carries contemporary carbon to be buried deep in the ocean and functions as a global warming counteracting mechanism. Taiwan rivers may have quietly taken up the challenge of keeping the Earth cool.

Photo taken in the Chichiwan River that is famous for the habitat of the endangered Taiwan Salmon (Credit: Tsung-Yu Lee)

As global warming is proven in the ascendant, far more positive feedback (e.g. glacier-melting reduces albedo and elevates atmospheric temperature) more than the negative one has been caused by the warming climate. Taiwan rivers, an epitome of Oceanian small mountainous rivers (SMRs), may have quietly taken up the challenge of keeping the Earth cool. In doing so, SMRs transport landslide-induced sediment, which consists of a lot of carbon recently drawn down from the atmosphere. A river is no more just a passage that delivers rainfall to the ocean, it also carries contemporary carbon to be buried deep in the ocean and functions as a global warming counteracting mechanism. This mechanism, in the recent decades, has been reinforcing because of the intensification of rainfall brought by typhoons. Whether Mother Earth, like Gaia hypothesizes, has chosen the SMRs to counterbalance the global warming crisis is an interesting issue to explore.

Let’s look at this issue this way: if the carbon dioxide, which is drawn down and fixed and kept by plants, some of them transferred to the soil, is buried in the bottom of the ocean, the chances that these carbon being released back to the atmosphere in a short time span are reduced. Maybe Mother Earth thinks so. And what’s more, catchments like those in Taiwan must be her best choice. According to the paper published on “Scientific Reports” in 2015, which is the result of my collaboration with Xiamen University and National Taiwan University, catchments of SMRs located in or near Oceania occupy a mere 1.8% of the global land area, but to our surprise, they export as high as 37Tg (Tg=10^12g) of biogenic organic carbon from land to sea. It is approximately 20% of the total terrestrial bio-carbon that is transported to the ocean annually.

Lignin has been widely used in tracing terrigenous POC in rivers and oceans, as a unique and the second most abundant biopolymer (representing approximately 30% of biosynthesized organic carbon) in vascular plants. 70-80% of lignin are distributed in the surface layers of soils, which are mainly plant litters as well as mineral soil that is rich in organic carbon, representing modern POC. Our river samples during typhoon events show that both the TSM and lignin concentrations of Taiwan SMRs are on average 2-4 orders of magnitude higher than non-Oceanian rivers. The particulate lignin export in 96 hours by a single Jhuoshuei River amounts to ~20% of the annual export by Mississippi River (600 times larger catchment area). Together with the historical sediment transport estimation from Taiwan, we calculate that the historical lignin export ranged widely from 1.5 to 99.7 Gg per year, which resulted in a 10-100 times higher areal yield relative to non-Oceanian rivers.

Taiwan rivers are known for high turbid water and the highest sediment areal yield in the world. The extreme rainfall event usually causes high turbidity (sediment concentration > 40 g L−1) flood; thus, generates hyperpycnal flow to transfer terrestrial POC episodically and efficiently into the deep sea for burial. My collaborators and I have also found that the mean daily sediment export from Taiwan in the recent stage (1990-2010) significantly increased by >80% compared to in the early stage (1970-1989), revealing that more and more sediment is delivered to the ocean per unit of runoff. Landslide triggered by the increased rainfall intensity is the main source of the sediment in the river. This part of work has been published in PLoS ONE. The two studies together show that Taiwan rivers are taking the mission from Mother Earth to deliver the terrestrial carbon to the ocean for carbon sequestration.

The increased rainfall intensity has been resulting in the chain reactions in the watershed, not only the increased fluvial carbon transport but also the nitrogen/carbon cycle within the watershed. For other relevant studies conducted by Tsung-Yu Lee, please refer to the link, http://www.geo.ntnu.edu.tw/en/people/bio.php?PID=183#personal_writing