The Otherworldliness of Massive Volcanic Eruptions 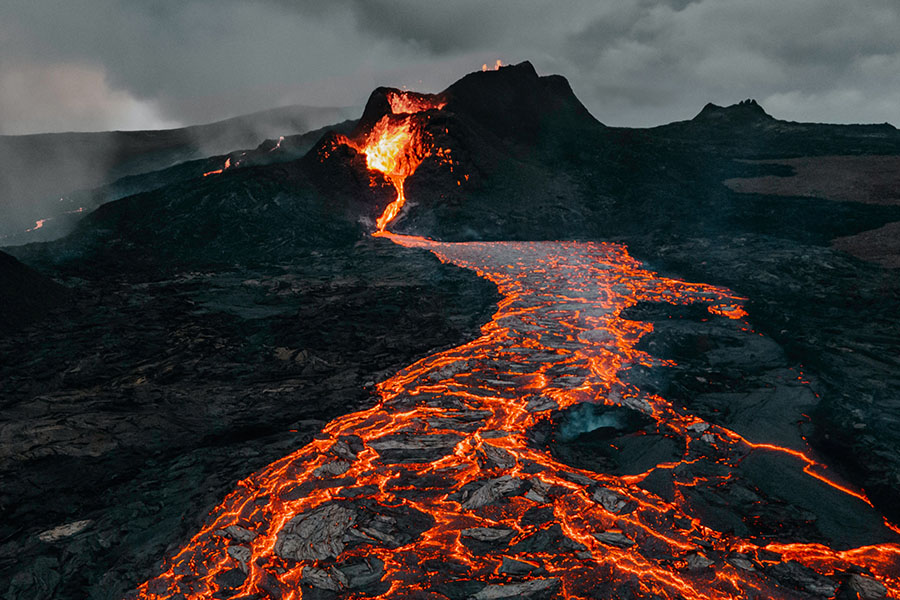 Earth is the only terrestrial planet in the Solar System that has evolved, forming a Si- and Al-rich (sialic) crust. The formation and development of sialic or continental crust is a first order scientific issue that is not fully understood. However, with the discovery of plate tectonics, it appears that most continental crust is created at convergent plate boundaries via partial melting and accretion of primitive crust. The initiation of plate tectonics remains uncertain but likely began 2.8 to 2.5 billion years ago. In addition to convergent margins, continental crust is created and recycled within plates due to the voluminous emplacement of high temperature basaltic magma. These immense regions of primarily mafic magmatic rocks within continental crust are known as large igneous provinces (LIP). The Late Permian Emeishan large igneous province (ELIP) is one of the most comprehensively studied continental magmatic provinces in the world and covers ~300 000 km2 of southwestern China with displaced, correlative units in northern Vietnam. The ELIP is of tremendous geological interest because it hosts world-class ore deposits and is contemporaneous with a mass extinction. The majority of lavas and plutons were emplaced 260 ± 2 million years ago, and the principal volcanic unit of the ELIP is the flood basalts. However, there are also ultramafic and silicic lava flows and ore-bearing layered mafic-ultramafic and silicic plutonic rocks as well. The formation of the ELIP may be related to a combination of mantle sources that include the relatively shallow lithospheric mantle and the deep mantle.

The development of continental crust on Earth is a longstanding problem as the geological record prior to 4.0 billion years is poorly known. Knowledge on the formation of continental crust is based on the Archean rock record. The difficulties in understanding crust formation are related to the limitations of the rock record but also the possible tectonic processes that were operating on Earth at the time. The development of plate tectonics, in particular convergent plate boundary processes, permitted the creation of large volumes of sialic (Si- and Al-rich) continental crust. Furthermore, continental crust is created and recycled within plates and is associated with emplacement of voluminous high temperature primitive magma. These immense regions of basalt lava are known as mafic continental large igneous provinces (LIP).

The study of large igneous provinces requires a multidisciplinary approach to fully understand and characterize the thermal, biological and geological consequences of their formation. Mafic continental large igneous provinces are voluminous, spatially contiguous regions of the continental crust where mantle-derived volcanic rocks and their intrusive equivalents were emplaced over a short period (~10 Ma) of time. The formation of large igneous provinces is debated as many are considered to be derived by a diapiric upwelling of mantle material (mantle plume) possibly originating from the core-mantle boundary, whereas others are considered to be related to decompressional mantle melting associated with tensional plate stress also known as the “plate” model. The rapid emplacement of mostly mafic magma is often but not always associated with continental break-up and mass extinctions. Therefore the study of Phanerozoic LIPs has tremendous significance in understanding not only the secular thermal conditions of the lithosphere and plate tectonics but also how ecosystems respond to the effects of elevated rates of magmatism. Of particular interest is the Late Permian Emeishan large igneous province (ELIP) as it hosts numerous world-class base metal ore deposits and was contemporaneous with a mass extinction. 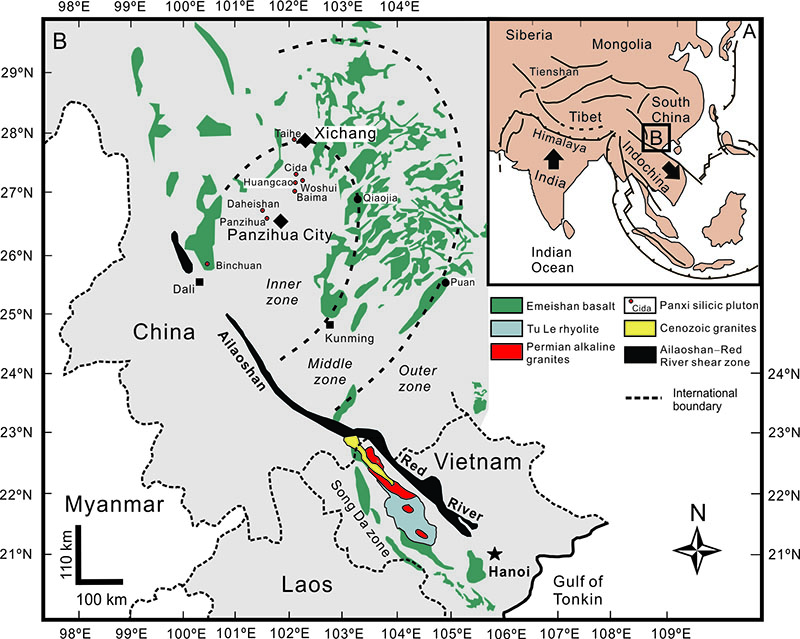 Figure 1. Map of the Emeishan large igneous province (ELIP), Ailaoshan-Red River shear zone, and the Tu Le-Phan Si Pan region. A: Inset map of the major suture zones of eastern Asia. B: Simplified map of ELIP showing the distribution of the crustal zonation, and the position of the main flood basalt relative to the displaced Tu Le-Phan Si Pan region (from Shellnutt et al., 2020).

The Late (~ 260 Ma) Permian ELIP covers an area of ~ 0.3 × 106 km2 primarily along the western margin of the Archean to Paleoproterozoic Yangtze Craton of the South China Block, but fragments are identified within the Tibetan plateau and the Song Da zone of northern Vietnam (Fig.1). The emplacement of the ELIP overlaps with the end-Capitanian mass extinction and may have contributed to or was the primary cause of the extinction event. The flood basalts are volumetrically the largest unit of the ELIP and can be chemically subdivided into low- and high-Ti groups based on the Ti/Y ratios and bulk TiO2 content. Furthermore, there are relatively minor volumes of ultramafic and silicic volcanic rocks. The ultramafic lavas were amongst the first to erupt as they tend to be restricted to the lower half of the volcanic sequences whereas the silicic volcanic rocks are primarily found in the upper flow sequences. The volcanic rocks initially erupted at 263–262 Ma on top of and between deposits of middle Permian limestone and on Precambrian cratonic rocks of the Yangtze Craton (Fig.2). The youngest flows erupted at 257–256 Ma. The plutonic/intrusive rocks of the ELIP include: granites, Fe–Ti–V oxide ore-bearing layered mafic–ultramafic intrusions, and mafic dykes. 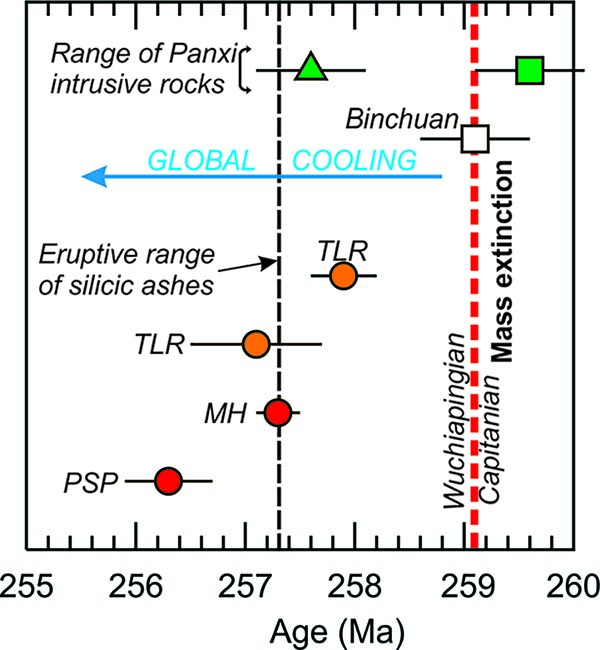 The evolution and development of the ELIP can be summarized thusly. During the Late Permian the Yangtze Block was a stable carbonate platform at tropical latitudes. The Emeishan volcanic rocks erupted along with the intrusion of several plutonic complexes. The majority of lavas erupted within a short period of time (260 ± 2 Ma) with volcanism tailing off by 257 Ma. The volcanic and the plutonic rocks are likely derived from magmas generated from a mantle plume source. The major and trace elemental and isotope composition of the Emeishan magmatic rocks indicate that the source was heterogeneous and possibly volatile-rich as is the case for some Ti-rich basaltic rocks. The subcontinental lithospheric mantle may or may not be involved but probably cannot be discerned with ease due to the isotopic heterogeneity of the rocks and the fact that the source may have been volatile-rich (e.g., CO2, F). The injection of mafic magmas induced partial melting of the Yangtze Block which led to the formation of some granite intrusions, whereas mingling between mafic magmas and crustal melts produced other granitic rocks. The mafic magmas that did not erupt but reached shallow crustal levels (i.e., < 3 km) crystallized and formed the cumulate layered mafic-ultramafic complexes, some of which produced both volcanic and plutonic silicic rocks (Fig.3). The formation of ore deposits within the layered intrusions is dependent on the depth of emplacement, the original parental magma composition, amount and timing of crustal assimilation including country rock volatile fluxing. It is possible, providing that magmatism was short lived, that country rock degassing contributed to climatic changes which adversely affected global ecosystems. 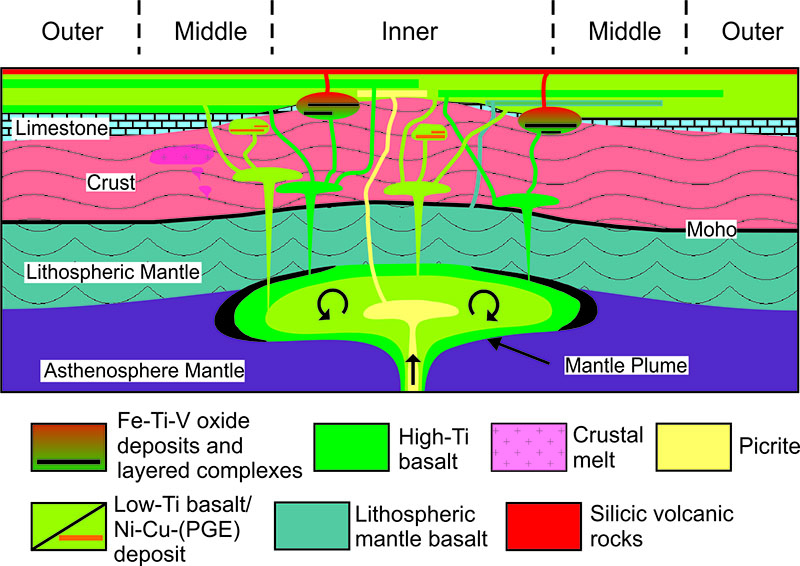 Figure 3.  A summary of the tectonomagmatic evolution of the Emeishan large igneous province. At 260 Ma the ELIP plume head arrives at the base of the lithosphere possibly inducing uplift of the crust and decompressional melting of the plume source. Mafic magmas are injected into the lower crust/upper mantle forming chambers. Some magmas erupt onto the surface whereas others reach relatively shallow depths and formed the oxide-ore bearing layered intrusions and sulphide-ore bearing intrusions. The continuous injection of mafic magmas likely induced partial melting of the crust which leads to the formation of the crust-derived silicic plutons and possibly the hybrid silicic plutons (from Shellnutt, 2014). 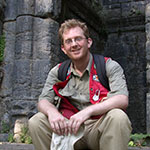 Prof. Shellnutt is currently a distinguished professor in the Department of Earth Sciences at National Taiwan Normal University (NTNU) in Taipei, Taiwan. He is the Co-Editor-in-Chief of the journal Lithos and serves as an editorial board member of Geology, Scientific Reports, and Frontiers in Earth Sciences.